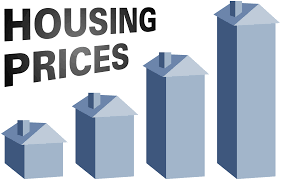 The UK housing market continues to experience dramatic price growth. UK property is now appreciating at its fastest rate in 18 years. Supply-demand imbalances are credited with the latest surge in prices.

Halifax reported that housing prices have continued with their dramatic assent into 2022. With prices already up by 6.8% so far this year. In monetary terms, this represents £18,849 growth on the average-priced property. The price of an average home is now at £294,845. This is despite the cost of living crisis that has gripped the UK.

Halifax explained that the market “defied any expectations of a slowdown”, with prices rising 1.8% compared with May. This was the biggest monthly rise since 2007. Looking at a rolling 12-month period UK house prices have risen by 13%. This is the highest 12-month rise recorded since 2004.

The average property now stands at £294,845. This is yet another record high, with house prices have risen every month over the past year.

Russell Galley, the managing director of Halifax, stated: “The supply-demand imbalance continues to be the reason house prices are rising so sharply. Demand is still strong – though activity levels have slowed to be in line with pre-Covid averages – while the stock of available properties for sale remains extremely low.

“Property prices so far appear to have been largely insulated from the cost of living crisis which is a result of a high inflationary environment. At the beginning of this month, we reported that whilst inflation has taken effect globally, wage increases have not followed suit. Governments have increased interest rates in an attempt to reduce inflation. In the UK base rate has risen to 1.25% as illustrated by the chart below. This has resulted in higher mortgage costs.

One explanation is that the rise in the cost of living has hit people on lower incomes. “This group is less active in buying and selling houses. In contrast, higher rate earners are likely to be able to use extra funds saved during the pandemic.”

Russell Galley continues “the housing market would not remain immune from the economic slowdown. But for now it was being supported by a “huge shift” in demand towards bigger properties, with average prices for detached houses rising by almost twice the rate of flats over the past year” These numbers are backed up with13.9% for detached houses compared to 7.6% for flats.

“In time, though, increased pressure on household budgets from inflation and higher interest rates should weigh more heavily on the housing market, given the impact, this has on affordability,” Galley added. He said the house price-to-income ratio had reached a record level.

“So while it may come later than previously anticipated, a slowing of house price growth should still be expected in the months ahead.”

The response from the major house players was mixed. The Property Industry Eye published responses from industry experts concerning the information supplied by Halifax.

Stuart Law, CEO of the Assetz Group, said: “This month’s data highlights that house prices are still rising considerably, challenging any sign of a major slowdown in the near future. Momentum is still driving house prices up highlighting that, despite turbulent economic conditions, demand for housing is still strong. It seems that the cooling of the market will be far more gradual than people first expected as demand has remained strong. However, as I have said for a long time, these high prices are driven by a huge shortage of homes for sale in the UK as housing supply remains very subdued. This means meeting housing demands remains a prominent and very political issue that can’t be ignored.

“Volatile economic conditions including the current cost of living crisis, rises in interest rates and high inflation continue to profoundly shape access to housing. House prices remain resistant to those conditions, for now, but this growth is dangerous, and we risk a lot of people becoming locked out of the market as prices are so restrictive. Supply and demand have been out of sync for a long time now and we need to level supply and demand by boosting the number of new homes being brought to market, which in turn will bring house price growth back to sustainable levels.”

Tom Bill, head of UK residential research at Knight Frank, stated: “Frustrated demand that arose from a period of low supply has combined with concerns over rising mortgage rates to trigger a very active UK housing market. However, it is the sort of sweet spot that won’t last forever. Higher mortgage rates will eventually begin to curb demand, which could be compounded by political uncertainty if a general election is called.”

At the start of this year, there were 350,980 properties for sale in the UK, according to consultancy TwentyCi, 36 per cent fewer than at the start of 2020, and the lowest amount since the company began collecting data in 2008. This supply shortage is in part due to the government falling short of its commitment to building new more new homes after years of undersupply. The other part is due to buy-to-let investors staying put in response to a mortgage surcharge that was implemented in 2016. The surcharge makes it more expensive for this group to change their portfolios so these houses are effectively off the market.

Other countries have been less fortunate. Rising interest rates globally have reduced affordability, as shown by the table below. The net result is that property prices are falling in many parts of the world. There are estimates that the US housing market could have retracted by as much as 10 per cent, with many cities already seeing bigger falls. They report that Toledo (Ohio) -18.7%, Rochester (N.Y.) -17%, Detroit -15.4%, and Pittsburgh -13.7%, are the worst performers according to a report by the Daily Mail.

Earlier this month The Week reported negative sentiment in the eurozone. “The European Central Bank has warned that rising interest rates are likely to lead to “a correction” for eurozone house prices, which it judges to be “15% overvalued”, said Martin Arnold in the FT. Indeed, “a reversal in the region’s housing markets was one of the main risks identified by the ECB’s twice-yearly financial stability review” Whilst in Oceania, both Australia and New Zealand have also reported negative figures.

Predictions for the UK housing Market

Nicky Stevenson, Managing Director of national estate agent group Fine & Country, commented: “The slowdown predicted by so many has yet to materialise in any real sense despite an increase in borrowing costs and a squeeze on household incomes.

“While a more aggressive tightening of monetary policy is anticipated later in the year, the cooling effect is likely to be gradual given the acute shortage of housing stock which persists right around the country.

“The boom which has sustained itself for so long is still bubbling strongly.”

Iain McKenzie, CEO of The Guild of Property Professionals, said: “It will surely be only a month or two before we see the price of the average property break through the £300,000 barrier for the first time.

“Growth is being driven by the imbalance between supply and demand, with higher-earning professionals pushing up the price of larger, more expensive, detached homes.

“Who knows when this incredible run of 12 consecutive monthly rises will end, but perhaps it’s not as soon as we thought.”