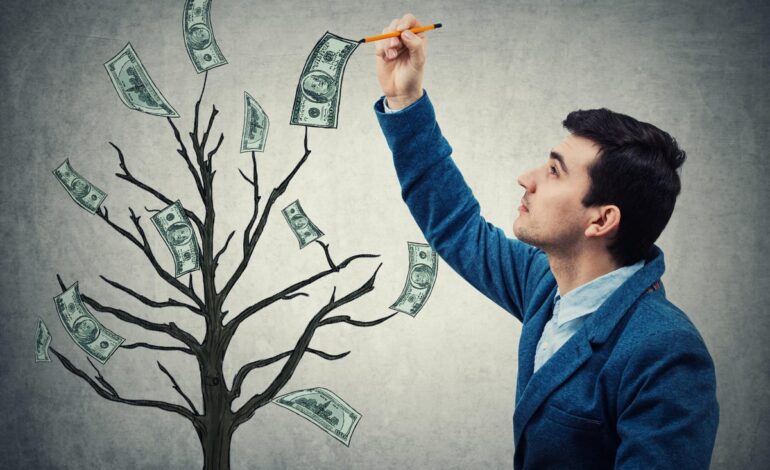 Most people have a very limited understanding of how banking actually works. Even many economics undergraduates are still learning outdated models of the banking system. In this article, we give a brief insight into the banking process and explain how banks can create money from nothing.

There is a big misconception from the general public that banks look after money for savers, and pay them interest. The banks then loan out some of that money to other people and businesses. They charge borrowers a slightly higher rate of interest, and that’s how they make their profit. This viewpoint could not be further from the truth.

What is fractional banking?

Under this misconception, people believe that banks only have to hold onto 10% of the money that they lend out. This method is also commonly referred to as the “money multiplier model”, and this is often taught in economics. Under the money multiplier model, if a person borrows money from a bank and then buys something, and the seller then deposits the money in their bank, then the bank considers it real money. This is despite its money that has been originally borrowed from another bank. So if a bank holds 10% of it in reserve, and then loans out the rest, which for a reserve ratio of 10% means that for every £100 deposited in a bank, £1000 is generated from loans. Thus multiplying the money supply by ten.

A worked example of the money multiplier model in action

A person deposits £10,000 of savings in the bank. The bank then keeps £1,000 of this money (10% as a reserve) and then lends £9,000 out to a customer to buy a used car. The seller of the car puts £9,000 in their bank. This receiving bank can now lend out 90% of this £9,000 deposit which creates an extra £8,100 of money that can be lent out to another customer who refits their kitchen. The kitchen company then deposits £8,100 in their bank. The receiving bank holds 10% in deposit and then lends out £7,290 to a person who is going on a family holiday. This cycle keeps going until all the funds dwindle down to nothing.

However, this concept is also incorrect.  There is no longer a fractional reserve system in either the UK or the US. In fact, this model has not been in use for decades.

So how can banks create money from nothing?

Banks are not restricted in their ability to lend out money. There are no legalities imposed on them by the Bank of England as often described under the money multiplier model. A video taken from the Bank of England explains this in great detail below.

So as there is no longer a fractional reserve system in the UK. The only determinant stopping banks from creating money is their confidence in the borrower to repay the loan.

The accounting process of creating money

A person goes into the bank to borrow £9,000 for a used car. The bank performs a credit check and looks at the person’s income. The bank then decides on the likelihood of the customer paying the bank back. If the bank is confident that the loan will be repaid, the bank will lend the customer money.

As you can see the bank did not have to make any money, it just used two electronic entries of a credit and a debit which cancels each other out. However, the bank will charge the customer interest on the loan and that results in the banks profit.

On the flip side, when a customer pays back a loan then the money in circulation reduces.

The Bank of England is keen to point out that whilst banks can create money there are still some limitations to their lending. There exists regulation in respect to how much money they can create. This comes in the form of a need to hold financial resources called capital in case people default on their loans.

Additionally, banks need to hold electronic reserves in the Bank of England to clear net movements of funds between banks. This need for a bank to settle between its peers results in banks only being able to lend out money (that they create) proportionately at the same level as other banks, or they will get dangerously low levels of reserves at the Bank of England. This is because when a bank authorises a loan to a customer there is a high chance that the money will be spent on a good or service and this money is likely to go to another bank.

Why is there a misconception on how banks can create money?

This is a difficult question to answer. And in reality there is no one answer to this question. What is obvious is that banking is complex, and most people just think about money as something they need to pay their bills.

One reason why people look at outdated models is that they are aware that only the Bank of England can print money. So this probably accounts for the majority of this misconception. It is anticipated that only 4% of the money in circulation is physical notes and coins. This means that around 96% is electronic money which has mostly been created by commercial banks.

Problems with the existing model

There is a big problem with the banks being able to create money from nothing. And it comes down to how banks lend. As explained earlier, a bank’s only consideration when lending is the probability of being paid back. This then means banks are far more likely to lend to people who are buying an asset as they can take a charge over the asset as security to be paid back. So banks are happy to lend money to people buying property, or other assets, but not to businesses that are creating wealth. The net result is property trading hands at progressively higher multiples of income, whilst businesses have a funding shortfall. To address the lack of funding available to early stage growth companies the government introduced the Enterprise Investment Scheme in 1994. This has proved to be a resounding success in incentivising angel investors to provide these companies with the capital they need.

Another concern is that many MP’s don’t understand how banking works. This then causes problems when they vote on decisions relating to the economy as they are making decisions on an inaccurate perception of how the economy works.