Rightmove has just published its house price index and the UK market continues to rise despite the cost of living crisis. We take a look at the findings of the UK’s best used property portal.

Unless you don’t use a computer or you reside outside of the UK you are very likely to be familiar with Rightmove. The company was created in 2000 as a joint venture between four of the UK’s largest property agents: Halifax, Countrywide plc, Royal & Sun Alliance, & Connells under the name Rightmove.co.uk Limited. Since its inception, it has become the nation’s favourite go to choice when looking for a new home.

In 2021 Rightmove reported that they receive 208 million monthly visitors to its site. Their closest competitor Zoopla only racked up 120 million. Because of Rightmove’s market dominance, most estate agents list their clients’ properties on this portal. This makes them very useful for giving market insights about the UK property market. In the next section, we take a look at Rightmove’s findings.

Rightmove has recorded that property coming to market hits sixth consecutive record. The average asking price now stands at £369,968. This is a rise of 0.4% in the month, or £1,354 in monetary terms. It is important to point out though that Rightmove’s property index is not taken on house sales recorded at the land registry but on listed on their portal. As a result, this number was inflated. The average UK house price sale was £283,000 in May 2022 according to statistics from the UK Land Registry.

Rightmove have identified some key trends within their collated data.

Rightmove segment property prices to capture tends for different types of buyers. The average first time buyer property now stands at £224,943 but the markets are grown at a reduced rate compared to second-stepper and higher listed properties over the past 12 months. This reflects affordability issues relating to inflation and rising interest rates as buyers are now struggling to get on the housing ladder.

For second-steppers prices have surged over the past 12 months as they have been able to release equity from their home to move up the ladder. Interestingly the monthly change is down slightly compared to the previous month. This indicates that the market is starting to calm down.

At the top of the ladder, property prices are continuing to rise at a strong rate. This shows that affordability is not an issue for this segment of the market as they have not felt the impact of inflation as much as lower earners.

The map below shows house prices by region. For the first time in many months, we are seeing parts of the UK not reach record highs. This indicates that the market is slowing down. However, Rightmove remains optimistic that house prices will continue to rise due to a lack of housing supply. 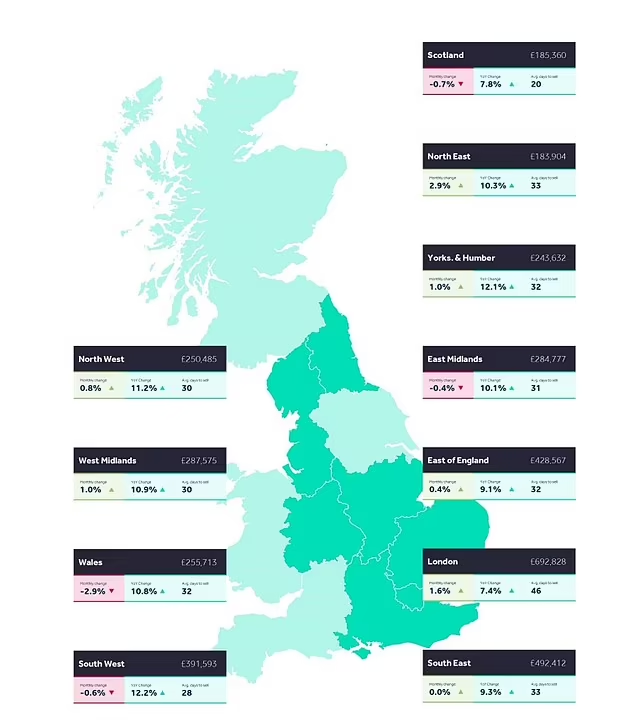 Tim Bannister Rightmove’s Director of Property Science has quoted, “Having more new sellers this month is a win-win for the market, as these sellers will likely achieve good prices for their homes given the sixth asking price record in a row that we’ve now seen, which may help to explain the increase in new stock coming to market over the last year. “

Bannister continues, “While more choice is welcome news, the number of homes available remains well below the more normal levels of 2019 and is unable to satisfy the continued high demand that we’re seeing. Though a softening in demand is moving the market from a boil to a simmer, it remains 26% up on 2019. With such an imbalance remaining between supply and demand, prices look underpinned, and we would therefore only expect typical smaller seasonal month-on-month falls, rather than more significant price falls in the second half of the year. This has led to us revising our annual price growth prediction for the end of the year from 5% growth to 7%, although this would still mark a slowing from the 9.3% seen this month.”

Several Estate agents have reacted to Rightmove’s latest findings. Jeremy Leaf, an estate agent from north London said, “Asking prices may still be rising but not at anything like the pace of last year despite the continuing shortage of stock.”

Whilst Ben Woolman, director at Woolbro Group, commented: “Though the economic reality has taken longer to dawn on the sector than others, buyer confidence is now clearly ebbing away amid rising inflation and tightening belts.”

“However, given the widely-anticipated slowdown in the delivery of new homes over the coming years – mainly as a result of rising building costs and a shortage of construction workers – demand will continue to outstrip supply, meaning the chances of a significant market correction are slim to none.”

Richard Davies, MD of Chestertons, commented some liquidity is returning to the market. “Whilst demand continues to outstrip supply, the good news is that June’s property market has actually seen a 23% uplift in the number of properties available to buy. This means that some buyers can currently benefit from a marginally larger selection of properties within their budget and desired area, which is good news for buyers who are less willing to compromise on their requirements.”

Robert Herring, MD of Esper Wealth stated “With such a low inventory of available housing stock, prices will remain high. However, with inflation coupled with rising interest rates, affordability for certain groups such as first time buyers has become difficult. Many simply can’t afford to get on the ladder.”